Next day Morning, we planned things out. Anwarka had a meeting with his friends at CHAI, and I was supposed to meet Di. Riding through Hyderabad was nice experience, strangely, we got a lot of thumps up along the way, especially at last night’s traffic jam. It’s either locals were giving us a lot of cheers, or the gesture with the thumb pointing up meant something derogatory!

My friend cleared that up for me over breakfast at Belleny’s Taj. According to my friend, riders are met with good respect over here, and riding a Royal Enfield meant well.-Respect! Come to think of it I really didn’t notice much “bullets” in Hyderabad. Anyhow was a best good time spent in morning, catching up on old school days and boy! there was so much to catch up on!! (made us feel old but, hey what the hell 🙂 …OK! Di if you are reading this I speak for myself !!) happy ?? 🙂

I don’t remember having fried Idlies! they tasted soooo good! Just as all good things should come to an end, so did the time we had. We said our good byes and I rode back to CHAI. Time to get going again.

CHAI: – Catholic Health Association of India: –  a very serene place, sadly I did not have time to take much shots of the place. The people there were very friendly and nice, and I just loved the Salad they had made for last night’s dinner ! 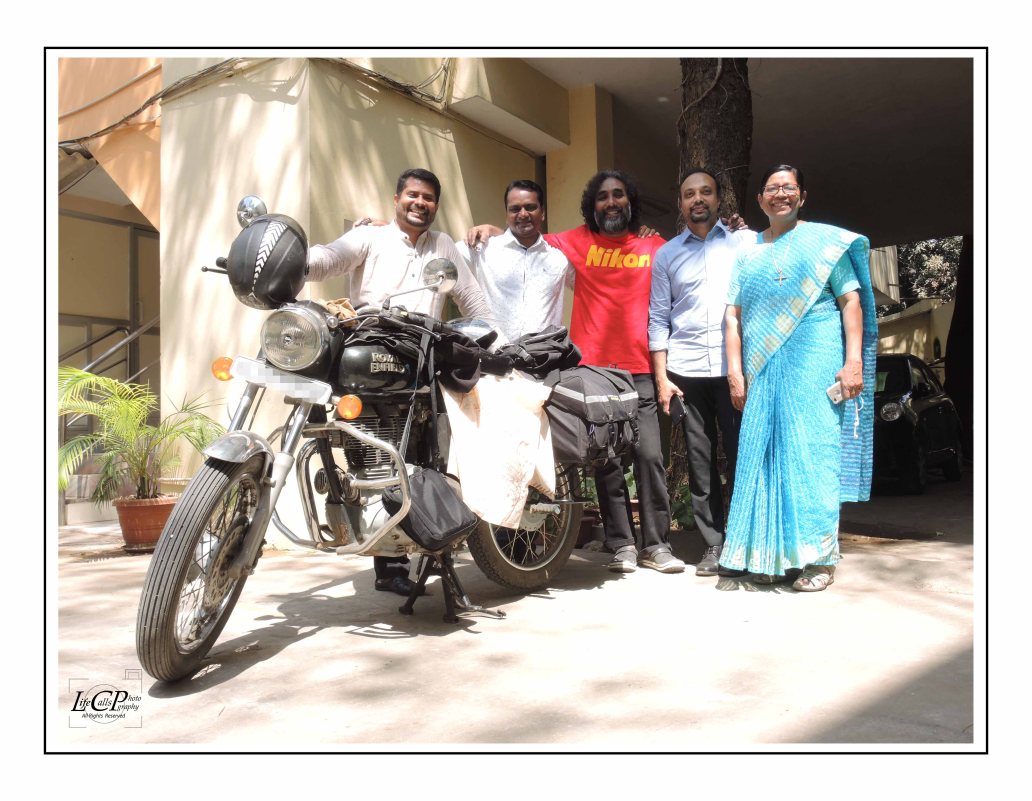 It was almost 11 by the time we left CHAI, (not a very good in terms of the heat) but was ok to wait out the traffic. We were on route to Srisailam and google took us to the open highway in no time. 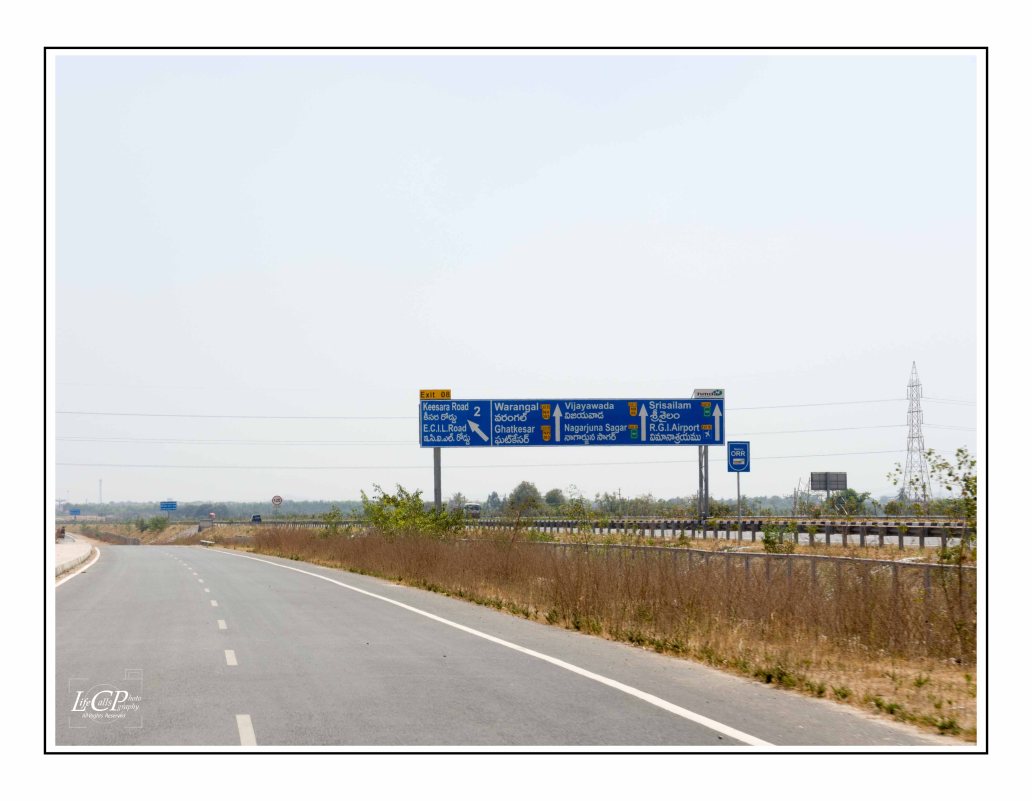 We had to take to ORR (outer ring road). but getting on the ORR turned out to be impossible. An attender at the Toll booth were we had to take the entry to ORR, said that 2 wheelers were not allowed on the ORR. Now this information was new to us and Google never made a mention of it. We asked for directions and was told we had to go back to the other end of the city were we could catch the route to Srisailam. That meant we had to ride all the way back, almost to the point where we had entered Hyderabad city yesterday. 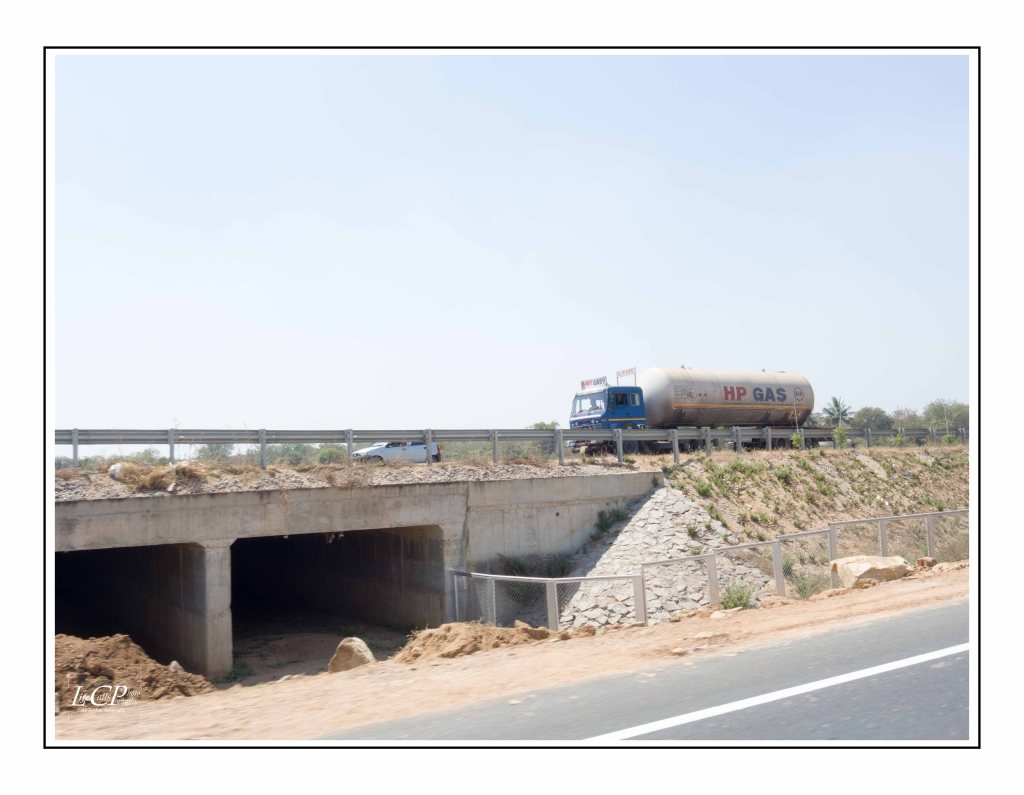 We should have seen the signs, we only noticed this later, but it really doesn’t say anywhere that 2 wheelers are off limits on the ORR 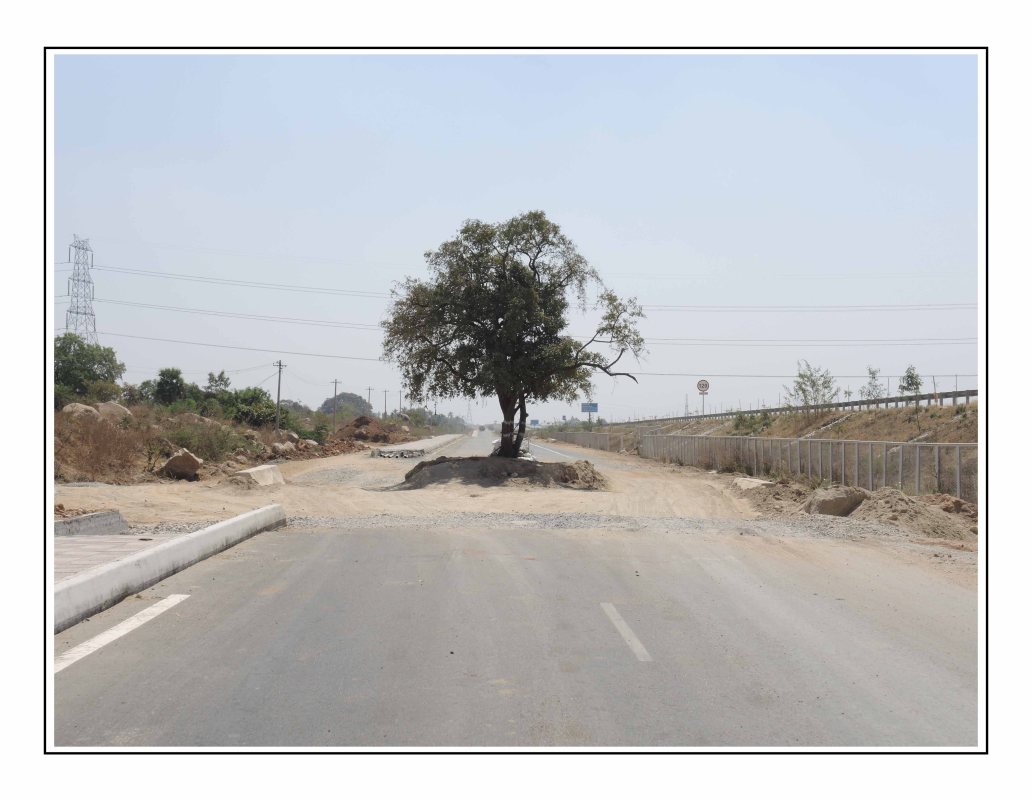 This was strange as well as interesting, Here is a tree right in the middle of the road! but kind of nice that its being preserved ! 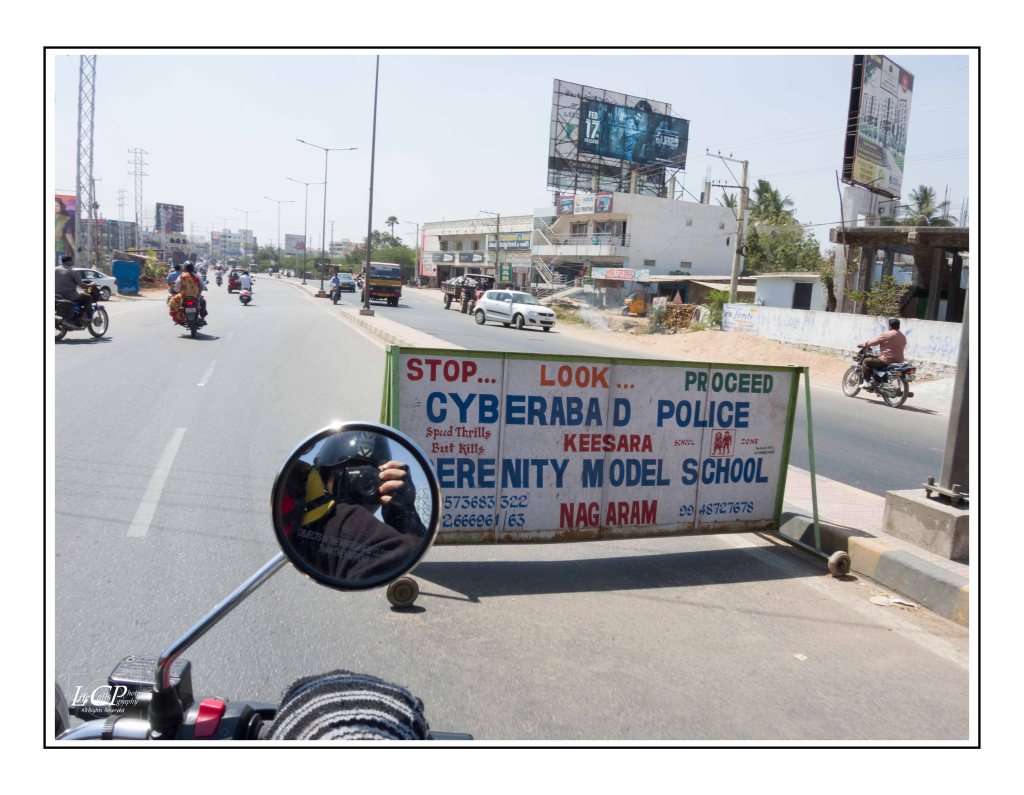 Passing through the streets of Hyderabad , trying to get on the ORR from the other end of the city 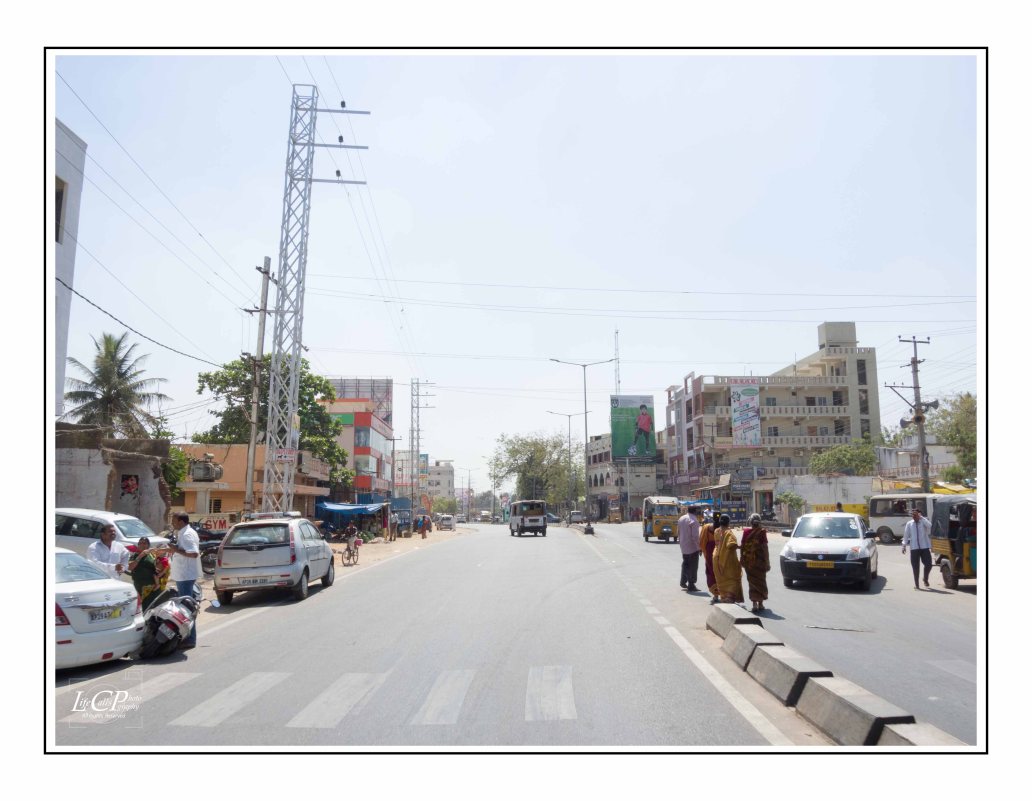 We stopped to by some oranges, the heat during this time of the year is a bit too much but I guess the riding experience made it bearable. 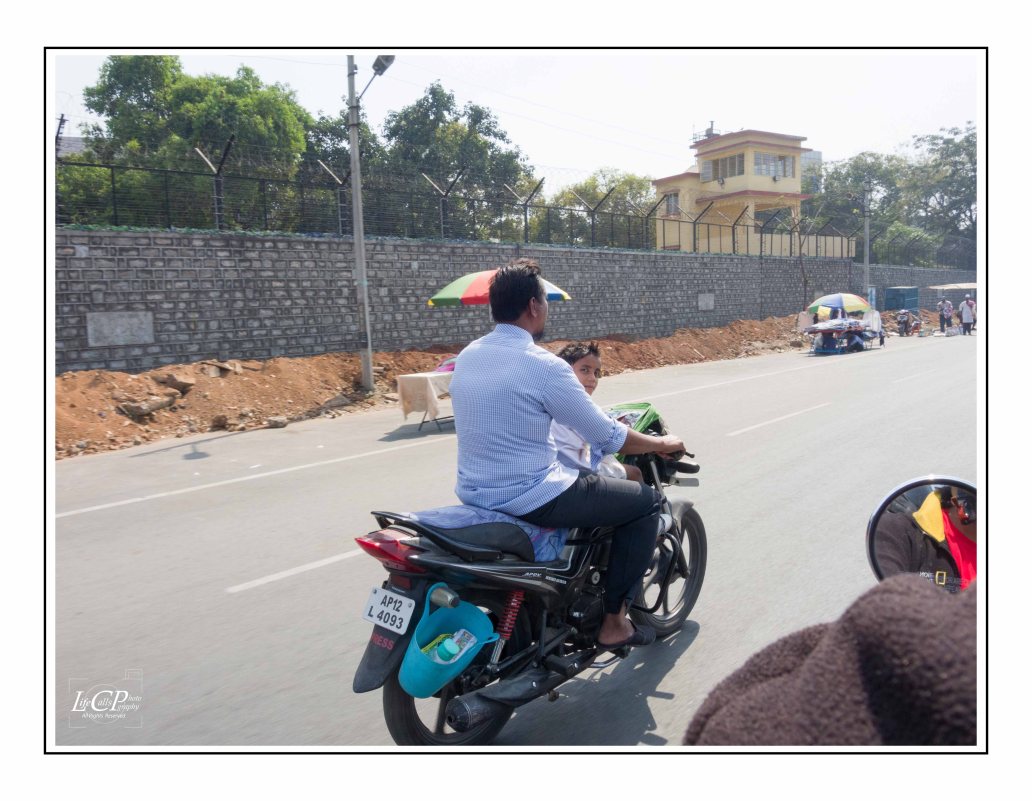 This kid was very interested in us, all along for good stretch he kept on staring at us. I don’t blame him !!: P 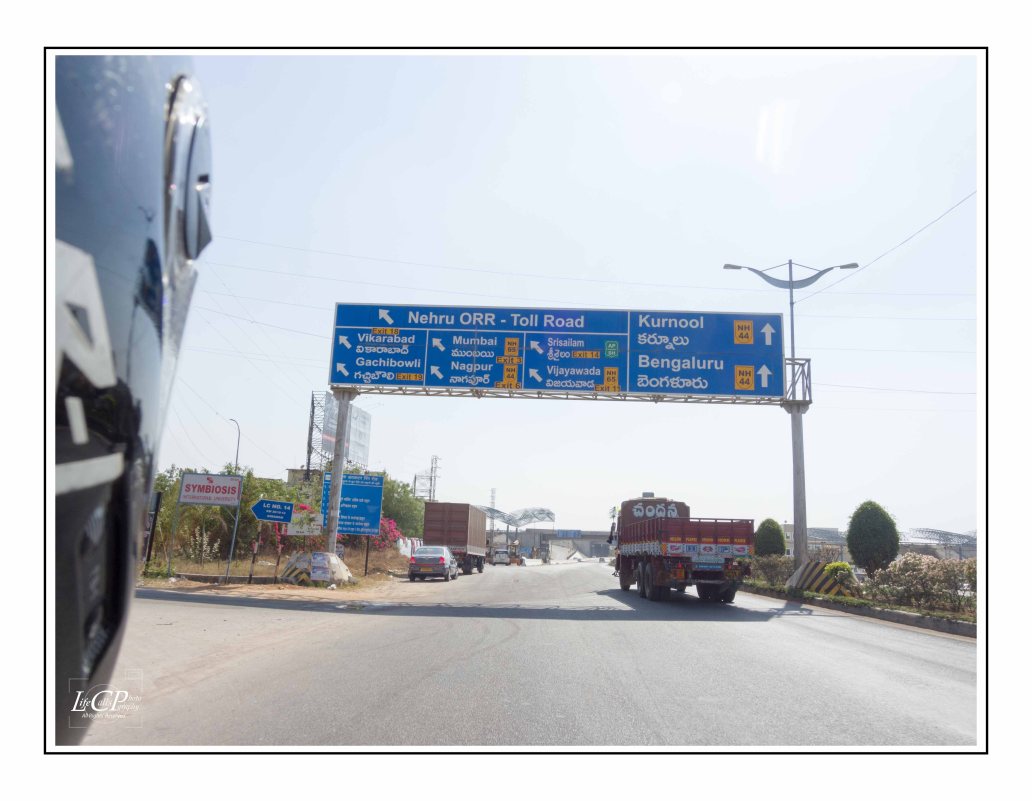 Finally, we reached the other end the toll booth and unfortunately, was the same thing, we were not allowed on the ORR and the locals told us if caught by the cops we’d be fined.  We got a new set of directions from one person and that again meant riding back a bit, but not too far. We now had to take the Airport road and exit to a highway that lead to Srisailam. 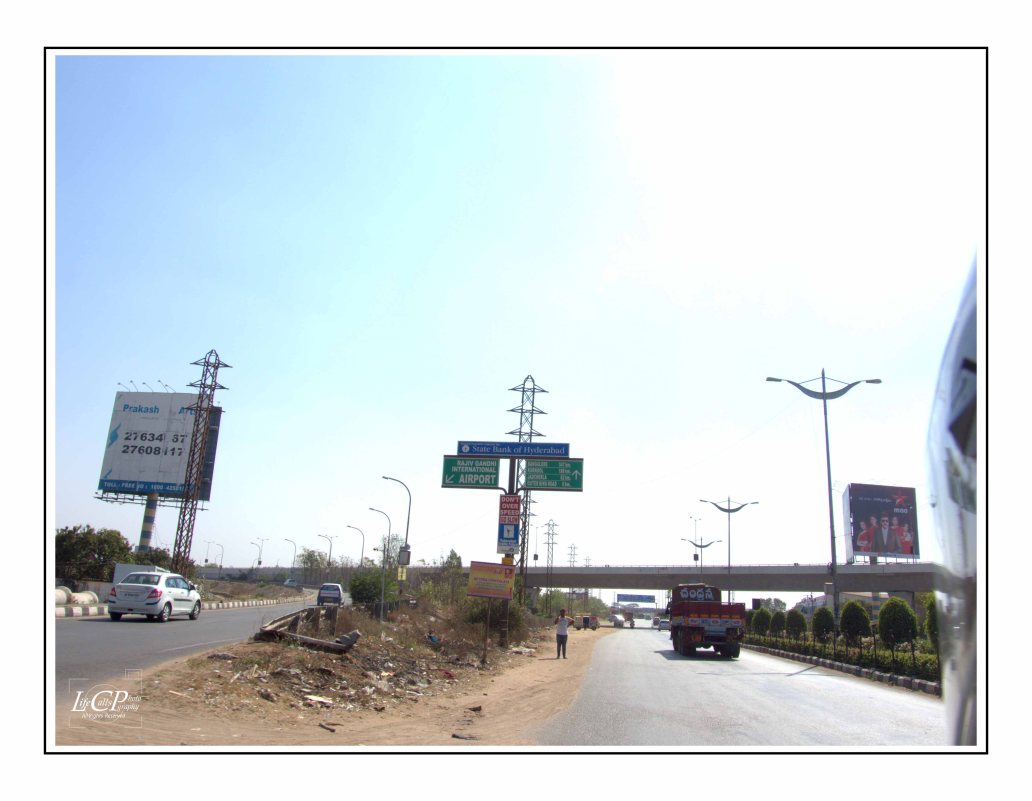 Finally, we hit up on the Airport road, and set our route to Srisailam.

While we took a break and re checked the route , I got my photographers bug bites and started to goof around with the old nik ! , It was almost 3 in the afternoon , we had left CHAI at 11 am , we had taken a huge time set back, Riding from one part of the city to another part , bearing the heat and the traffic , in search of and entry to the ORR . But that’s part of the ride , at times you loose your way not matter how good the  technology is, ( google) , One thing is Google is actually right  for a four wheeler the directions were pretty apt , now how was she to know we where on a motorbike and that ORR id off limits for 2 wheelers 🙂 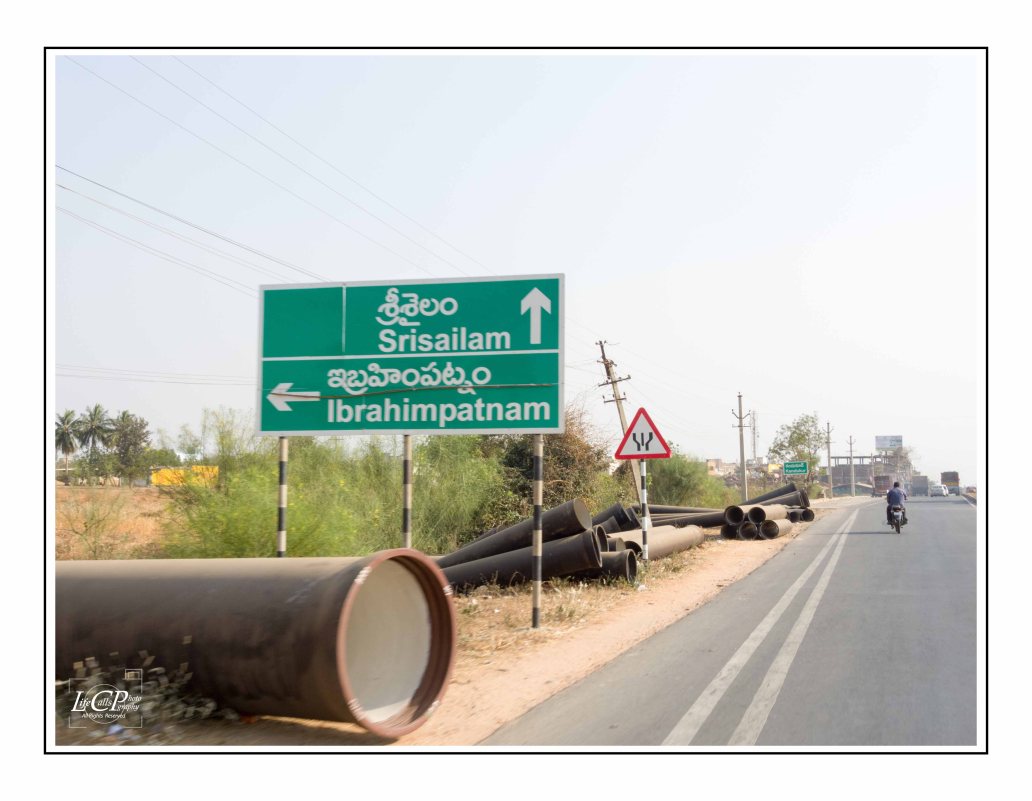 We were glad to see this , we were on the right path

Sights on the road 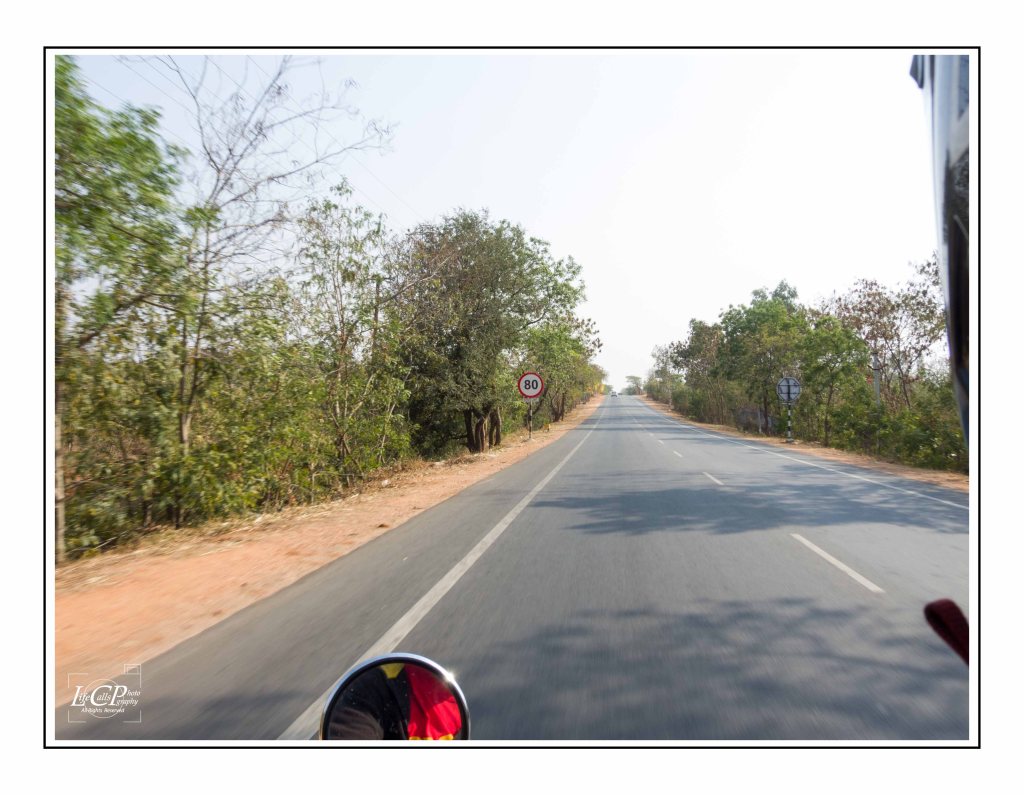 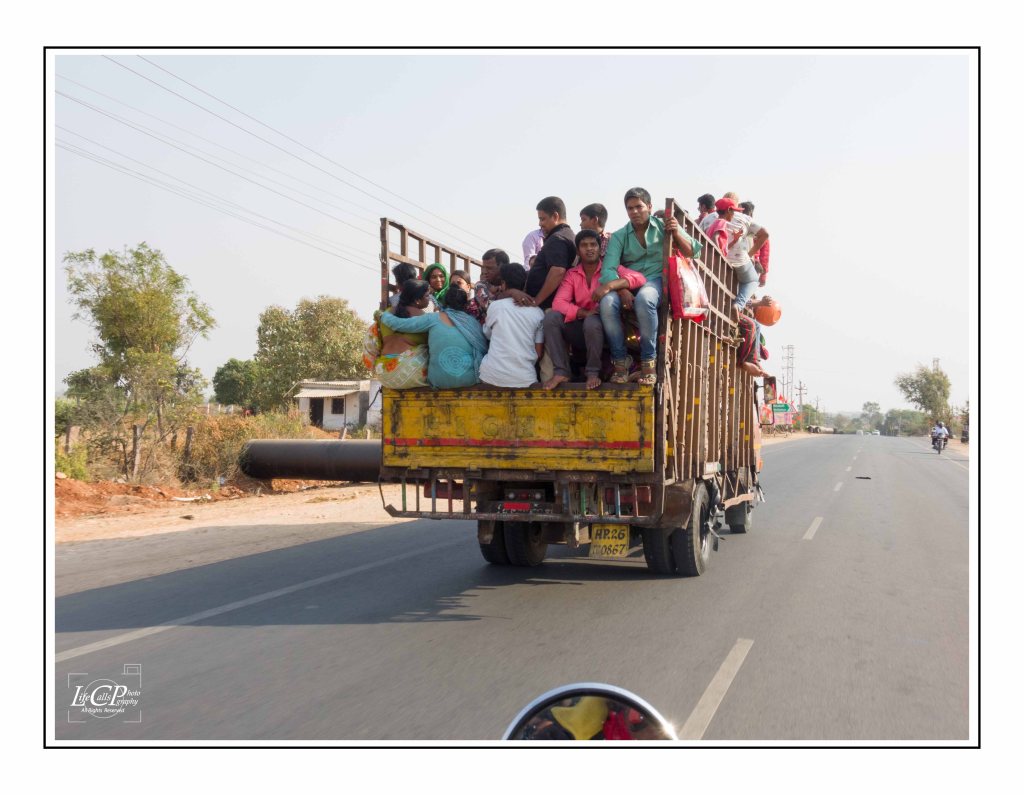 The tree that grew out of  the well

With the sun setting down, we took a break from riding, and decided to enjoy nature’s art with our cameras. 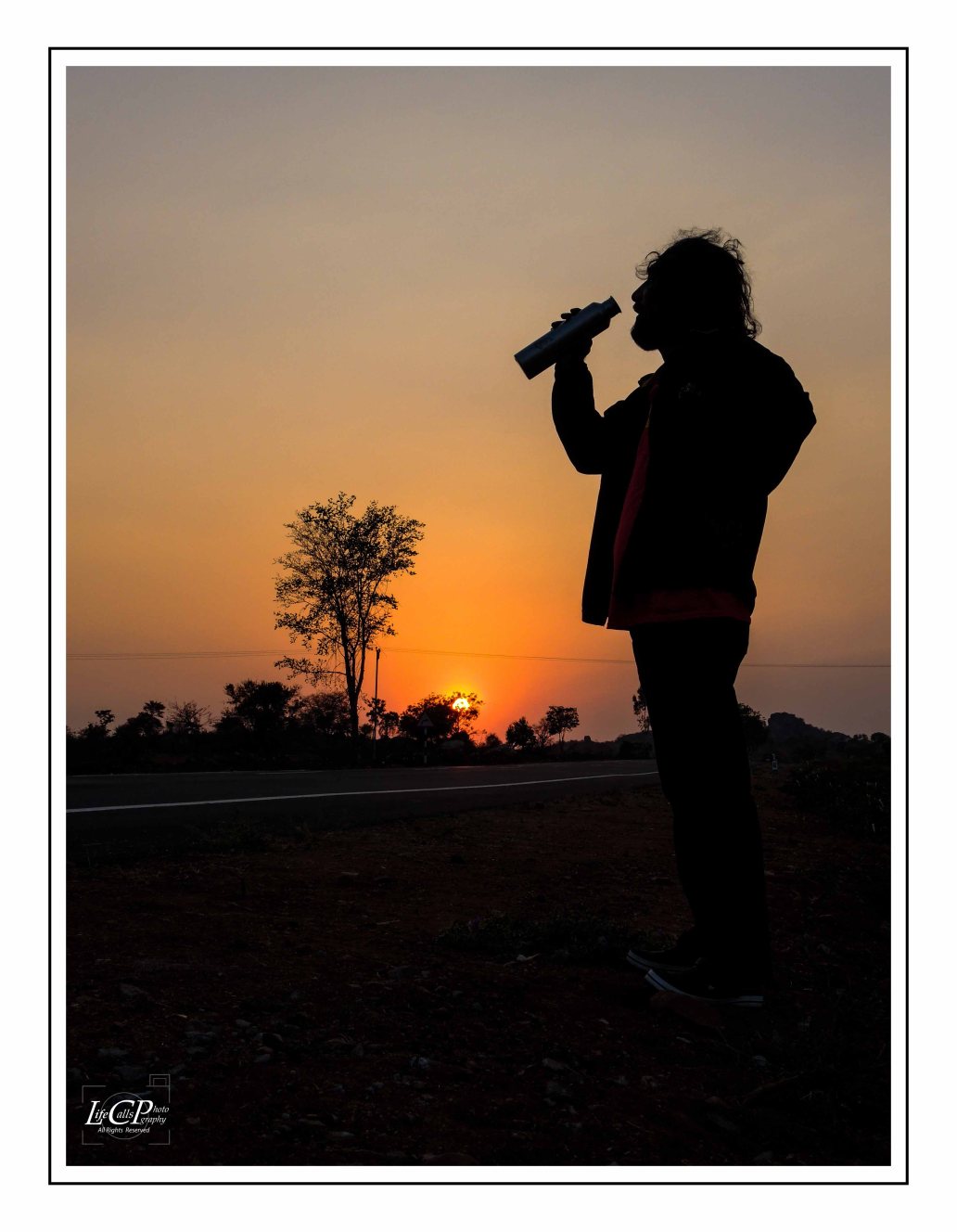 A few kilometers after wards we started the climb Nallamala Hills through the winding roads to Srisailam.  It was nearly 6 pm. We planned to halt at Srisailam and continue on to ride next morning, but the day had planned something different for us.

The delay in trying to get out of Hyderabad cost us the time we were supposed to reach Srisailam. Soon it was dark and we were still on the winding roads climbing and dipping as the road took us. 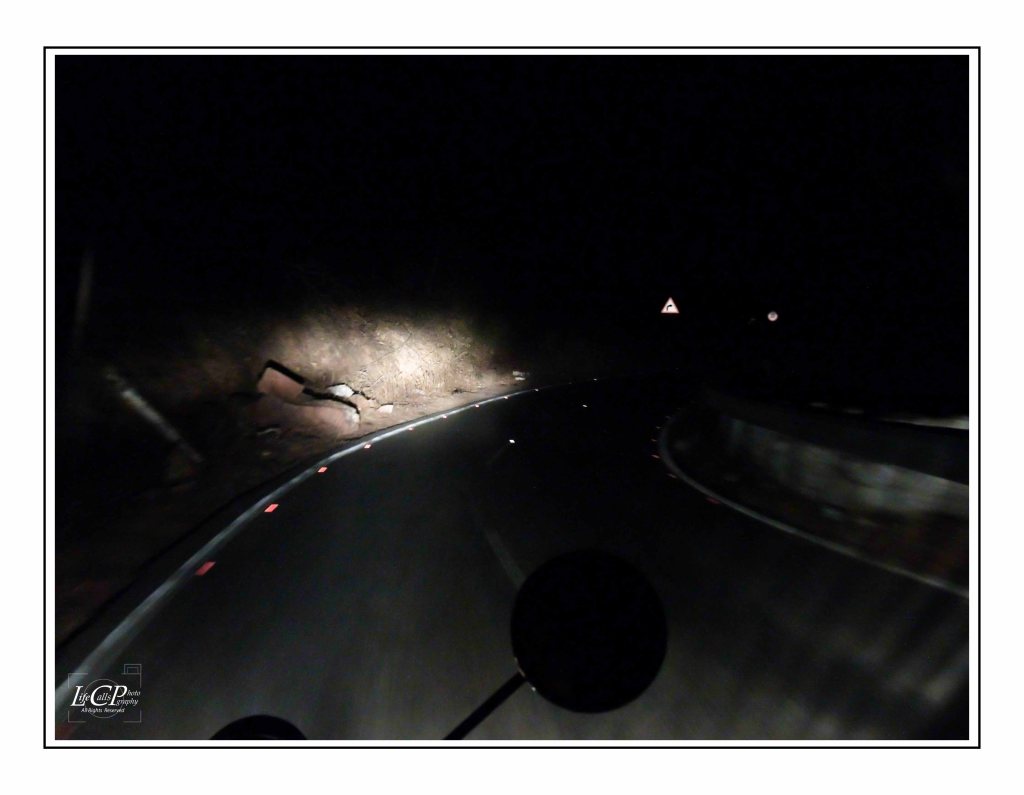 The dam at night, due to the festive season, there was just too much traffic to stop along the way and set up the tripod and camera, so held the click bug inside 😦 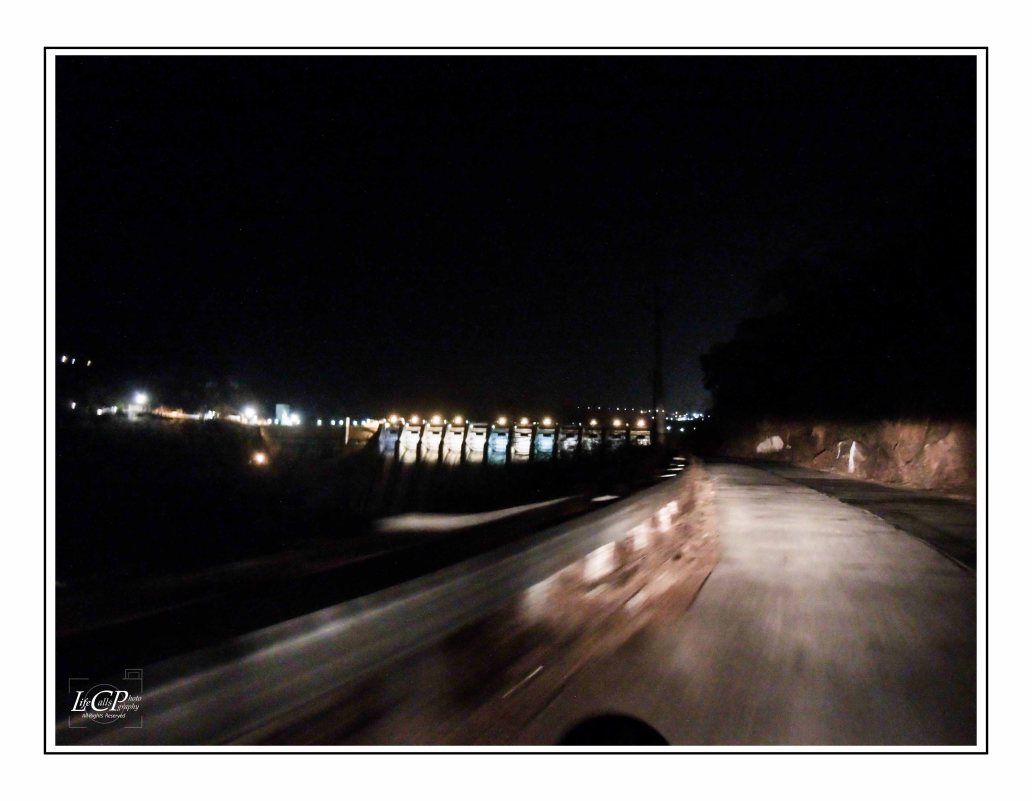 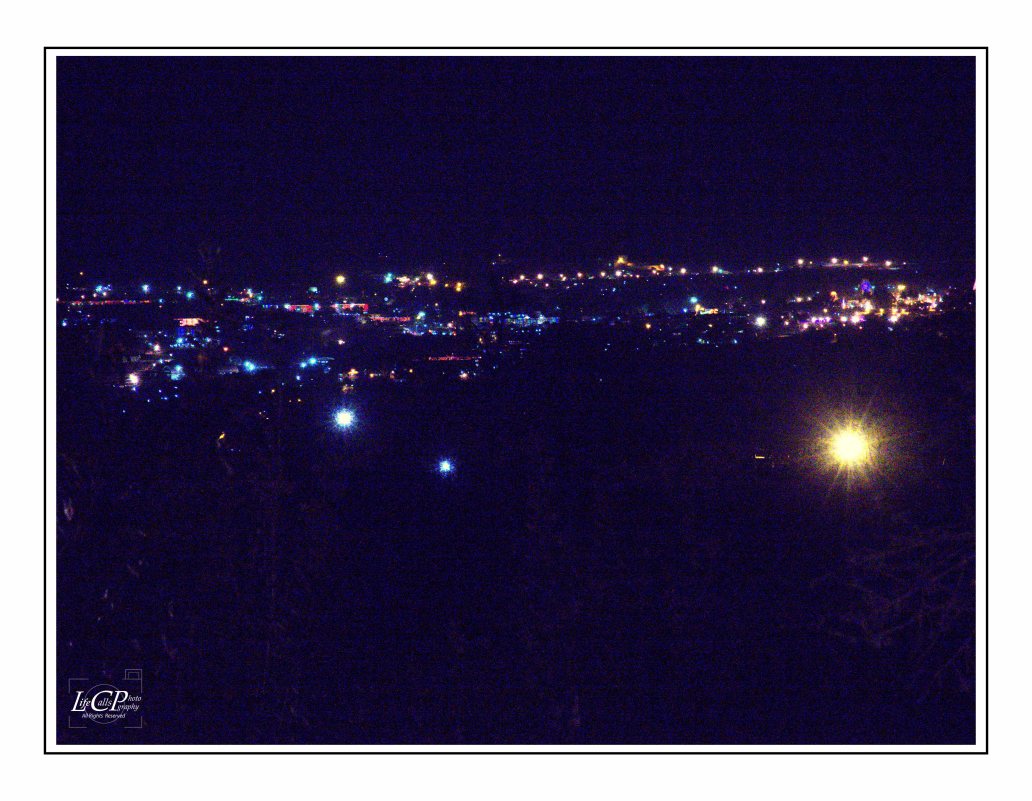 What we didn’t look in to (again a lesson learned), it was the festive night of Sivrathri. Srisailam is a known for its religious importance and the whole place was packed !!, we found it difficult to get any rooms on the out skirts and from the looks of it the town would have been packed. The highly lit road in the picture below are streams of devotes jammed up one after another in their vehicles heading to the main town. We sat around by the junction, had a few snacks and juices we had bought along. ( lesson learned from Anantapur 🙂 ) .

The next town google map showed us was Dornala. So we set course to Dornala, hopefully there will some nice place to stay. The route meant riding down the hill. The make shift back seat had moved about a bit, and was giving me some trouble sitting comfortably, but without much delay we were able get a place to crash for the night.